Most of Israel’s critics argue that any Israeli claim to the moral high ground is compromised by the fact that the Israeli military has been dominating the West Bank since 1967, thereby denying the Palestinians the ability to ever form their own state. While of course there is some truth to this argument, it nevertheless ignores a critical point: Israel believes it must control the West Bank, at least for now, in order to ensure its own continued safety over the long-term.

Even though religion is the key motivator for most of the Jews and Christians who have settled or support Jewish settlement within the West Bank, Israel’s desire to control the West Bank is not ultimately rooted in religion, but rather in physical geography and presumed strategic necessity.

By dominating the West Bank, Israel gains control over the Jordan Rift Valley, a steep-walled, incredibly deep canyon containing a number of the points on earth that are the furthest below sea level, through which the Jordan River (which is really more like a stream) flows into the Dead Sea. The rift valley has historically served as an excellent defensive barrier against invasion or incursion. Israel uses it both as a defensive border with Jordan and as a barrier separating the estimated three million Palestinians living in Jordan from the three million Palestinians living in the West Bank. Israel is hardly alone in wanting control over this valley: about seven different African states also use the Jordan Rift Valley (in Africa it is called the Great East African Rift Valley) as an international border.

Even more important, the West Bank allows Israel to control the hills and highlands that surround Jerusalem on three sides and directly overlook nearly every other major Israeli city. The average elevation of a West Bank hill is about 700-1000 metres above sea level.  Tel Aviv, in contrast, sits roughly at sea level, with its downtown core just 20 km away from the West Bank and with a number of its suburban areas, like Modi’in or Rosh Ha’ayin, within 2 – 10 km of the West Bank. The Jordan Rift Valley, meanwhile, sits around 200-400 metres below sea level. And the centre of Jerusalem is within 2-4 km of the West Bank in every direction except due west. 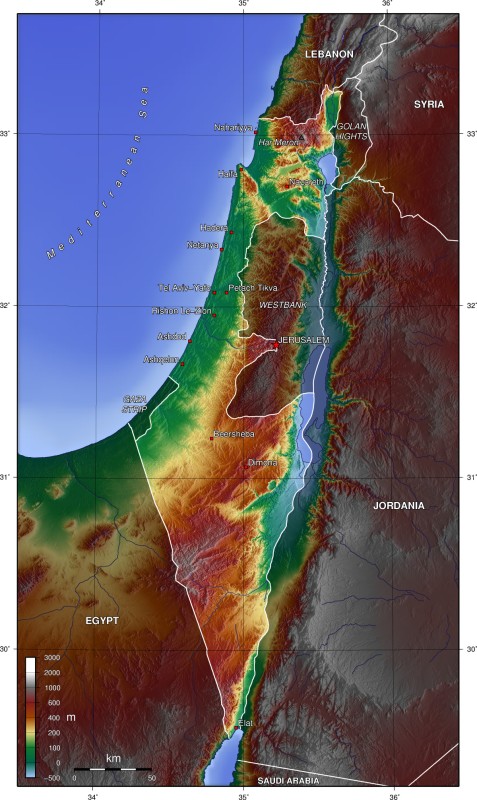 Managing the West Bank also lets Israel have control over any movement between West Bank Palestinians and Palestinians living within the pre-1967 borders of Israel, the latter of whom account for an estimated 20 percent of all Israeli citizens. Most Israeli Arabs outside of Jerusalem live in a region of hills and low mountains that is just around 20-60 km north of the West Bank, within which they make up about 50-75 percent of the regional population. This region also happens to be strategically crucial for Israel, as it borders Lebanon and overlooks Haifa (Israel’s largest port and third largest city) and the Jezreel Valley, the latter being Israel’s route to the the Sea of Galilee and Golan Heights, which is where the majority of Israeli freshwater is located and which serves as a relatively defensible Israeli border with Syria, Lebanon, and Jordan.

Israel’s continued occupation of the West Bank, then, is most likely the result of Israel’s intense desire for security, rather than the result of the Israeli government being a uniquely radical one. Indeed, it is possible that the Israeli government’s support for religious Jewish civilians settling the West Bank is based for the most part on the notion that these settlers are likely to help cement Israel’s strategic control over the region, rather than being a result of, as most critics of Israel believe, the Israeli government’s having been cowed or infiltrated by religious Jewish extremists. Of course, this does not mean that extremist views have not also become much too influential within Israeli politics.

The idea that Israel faces meaningful threats is not some outdated relic from the earlier days of Zionism when the country’s power was not yet fully-formed. To the contrary, it was only a decade or so ago, between 2001 and 2005, that a thousand Israelis were killed by Palestinian militants, most of them in suicide attacks. Relative to the size of Israel’s population, that would be the equivalent of about 45,000 Americans being killed, roughly nine times more than have died in Iraq and Afghanistan combined. In addition, Israeli attacks during this conflict claimed the lives of an even larger number of Palestinians.

Perhaps more worrying than the prospect of another intifadah, however, is the possibility – however unlikely – that Israel could suffer thousands or even millions of casualties by militant groups or individuals armed with weapons of mass destruction. This threat too may inform Israel’s continuing presence in the West Bank. If, for example, a country that has nuclear weapons, such as Pakistan, were ever to collapse into extreme chaos, one of Israel’s main defences would probably be to seal its own borders, and perhaps also to establish buffer zones in areas like the eastern Sinai Desert or southern Lebanon, until it could ascertain whether or not any such weapons were likely to have gone missing.  The goal would be to protect its core territories between Tel Aviv, Jerusalem, Haifa, and Be’ersheva.

This strategy might be an effective one, not only because Israeli borders are fairly short and carefully guarded, but also since it is extremely challenging to properly adapt a nuclear weapon for a missile – particularly a long-range missile – and because Israel has a relatively sophisticated missile defence system that it hopes to continue to improve over time. The weak link in the defence, however, could be the Palestinian territories, in which there are long-established smuggling, militant, and short-range missile networks as well as borders which are adjacent to major Israeli cities.

The West Bank poses a danger in this sense, because it directly borders and surrounds Jerusalem, overlooks the suburbs of Tel Aviv and Be’ersheva, and has a long external border with both Israel and Palestinian-inhabited Jordan. Indeed, the West Bank’s border with Jordan is more than 10 times longer than Gaza’s border with Egypt; the West Bank’s border with Israel is more than 6 times longer than Gaza’s. As such, Israel’s ability to respond to a nuclear threat arguably appears to depend on its ability to control the border of, or movement within, the West Bank. If you think this sounds paranoid, you may or may not be right – but still it is not surprising that security officials who live in dangerous places like Israel often think this way. The memory of the Holocaust also looms large in these considerations.

This does not mean that there is not a strong religious current running through the Israeli government and helping to drive its policy of expanded settler activity, or that the Israeli government’s alliance with portions of the religious right-wing is not a cynical one. Indeed, by issuing a claim on the West Bank that appears to be irrational – namely, that Israel has a right to it because Jews controlled it during parts of the Biblical era, or that God Himself granted it to the Jewish people – the religious right often dilutes and, in effect, undermines the true security-based explanation for Israel’s ongoing occupation of the West Bank.

Given that Israeli politicians understand Israel’s security situation extremely well, as many are themselves former military commanders or security officials, this also suggests that the Israeli government has been at least somewhat disingenuous with regard to the offers it has extended for a two-state solution in recent years or decades. Unless real trust is formed between Jews and Palestinians, or unless Israeli technology reaches such an advanced state that geographically-rooted security considerations are finally rendered meaningless, it seems unlikely that the Israeli leadership would ever remove its military from the West Bank in its entirety. Israel might not even be willing to remove much of its civilian settler population within the West Bank, as that can double as a security and intelligence force or political bargaining chip in times of crisis. The government’s offers to do so during peace talks, therefore, were perhaps never wholly intended to succeed, but may instead have been extended mainly in order to placate outside observers like the United States and Israeli peacenicks.

Clearly, the Israeli government has made, and continues to make, important mistakes. Many of its actions may even be cruel or counterproductive. Still, it is worth remembering that the primary motivation for the Israeli occupation of the West Bank is its very real and plausibly even existential security concerns, rather than its religious land-claims or nationalistic expansionism. The geopolitics of Israelis and Palestinians are simply intertwined now, and both must somehow find a way to make the best of a very dangerous – and, especially for the Palestinians, very tragic – situation. Getting God out of politics might be a good place to start.