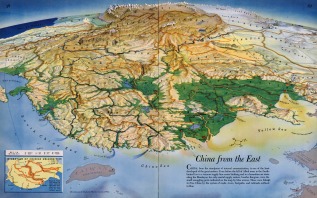 How can one measure China’s economic stability? In the West, it is common to look to Hong Kong and Tibet as litmus tests of the strength of the central Chinese government. While it is true that both Hong Kong and Tibet are very important places, their combined populations do not account for even one percent of China’s overall inhabitants.

These regions have a total population of over half a billion. They are home to a majority of China’s 120 million or so ethnic minorities, 300-400 million speakers of languages other than Mandarin, tens of millions of speakers of dialects of Mandarin that are relatively dissimilar to the Beijing-based standardized version of Mandarin, 20-30 million Muslims, 50-100 million recent adopters of Christianity, and tens of millions of family members of the vast worldwide Chinese diaspora.

Together, these regions form a cordon around the flat, triangle-shaped Chinese heartland that extends for more than a thousand kilometres from Beijing to Shanghai, where most of the rest of China’s population lives. Several other provinces, meanwhile, such as Shanxi, Gansu, Hunan, and the Hui Muslim “Autonomous Region” of Ningxia, arguably fall somewhere in between China’s central and peripheral territories, from both a geographical and political perspective.

Along with the high-altitude Tibetan(-Qinghai) Plateau and the Chinese Himalayas, these six peripheral regions possess by far the most rugged, expansive, and insular terrain within China. Their territories consist either of:

Not surprisingly, Chinese central governments, whether they are controlled by ethnic Han Chinese as is the case today, or else by outside invaders like the Manchu or Japanese as was the case for most of the past half-millenium, have almost always had trouble subduing most or all of these areas.

Indeed, China’s peripheral regions contain all of China’s land borders, which are the longest in the world, more than two thousand kilometres longer than all of Russia’s land borders and well over double the length of the continental United States’. These borders remain almost impossible for the Chinese government to fully control, not only because of their incredible length and difficult terrain, but also because they are located an average of between one and a half thousand and three thousand kilometers away from the Chinese heartland. Only two significant railway lines cross the western half of this enormous distance as of yet.

Complicating matters further, China’s borders are shared with fourteen different countries, nearly all of which possess either ethnolinguistic or religious ties with the areas of China they are adjacent to. These include:

As the economies of these peripheral Chinese regions as well as China’s neighbouring countries emerge, as in recent years many have begun to do at a faster pace than the Chinese economy has as a whole, they may deepen this array of cross-border relationships, and in turn could undermine efforts by China’s central government to enforce national unity within the huge Chinese economic and political system. The Chinese have certainly been worried about their neighbours within the relatively recent past: China sacrificed hundreds of thousands of its citizens during the Korean War in the 1950’s and then thousands during the Sino-Vietnam War in 1979, which, as a point of comparison, may be more casualties than the United States has suffered in all of the wars it has ever fought put together.

Since the 1980’s, however, as the China-US alliance took root and the Chinese economy began rapidly expanding, and as the economic growth of most of China’s neighbours collapsed in the early 1990’s (Japan and the Soviet Union), late 1990’s (South Korea, Taiwan, Southeast Asia, and British-era Hong Kong), or during the the 2008 global recession (Russia, Japan, Taiwan, Europe, and North America), while around the same time the power of China’s English-speaking rivals became preoccupied with Afghanistan and Iraq throughout the 2000’s, China has not had to worry about its borderlands nearly so much.

This is not to say that these regions were problem-free during this period. The Chinese government has in fact been concerned with many of them, including, for example:

Yet all such risks proved to be manageable ones, eased as they were by the amazing Chinese economic boom that was then still in full swing, and by the fact that China, which until 2010 still had an economy thought to be smaller than Japan’s, had not yet attracted the full attention of other powers intent on containing it.

Lately, in contrast, just as the United States has been disengaging from Afghanistan and Iraq and the economies of the US and Britain have begun speeding up again following their multi-year post-recession slog, and just as Japan, which continues to have the third largest economy in the world by a large margin, has finally begun to rebuild its will to implement an aggressive economic stimulus program and outwardly post-pacifistic foreign policy, many of China’s peripheral provinces and most of the countries surrounding China either grew or accelerated their economies at a faster pace than did the overall Chinese economy, which has slowed significantly in recent years.

In some of these areas, for instance on both sides of the border between south-western China and northern and eastern India, growth in 2014 accelerated at a much faster pace than in China as a whole. While China’s overall economic growth nevertheless remains quite strong compared to most of the rest of Asia and the world – at least, according to Beijing’s own official estimates, which admittedly are dubious – this constellation of recent trends does not bode well for its central government going forward.