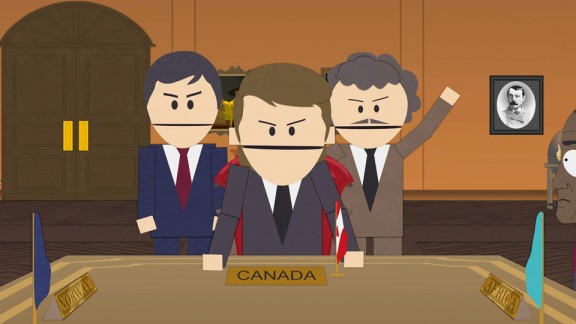 The last time Canada voted, in 2011, the result was an election of first-in-a-while’s:

Such a significant Conservative success reflected the fact that Canada’s economy and banking system performed better than those of most other rich-world nations following the global financial crisis. It was in fact only a year after the election that Bank of Canada chairman Mark Carney was enticed to move abroad to run the central bank in Britain, even though the British financial system is far larger, far more worldly, and far less dependent on natural resources than Canada’s, and had never before been run by a non-Briton. The myth of the super-responsible Canadian banker or financial regulator, a sort of modern Mountie in the otherwise cutthroat world of global capitalism, was in full swing. While this myth came mainly from other developed countries like the United States and England, which were desperately seeking an alternative to what they saw as their own untrustworthy financial classes, Canada’s Conservatives banked on the pride and confidence it generated to help them win big in 2011.

Like most stereotypes, this trait of the prudent, conscientious, and highly skilled Canadian banker may be true in certain cases – witness, for example, Brad Katsuyama, the hero of Michael Lewis’ recent financial bestseller Flash Boys – but still it is an exaggeration at best. Even as the Conservatives spoke of how their financial regulators and Canadian bankers had acted with the utmost restraint, the very opposite of greedy and wild Wall Street and Washington, they also enticed Canadian and foreign investors with lucrative dreams of becoming an “energy superpower”, intending the vast oil sands reserves in western Canada and Newfoundland to finally wean America off of the Middle East — and, simultaneously, to diversify Canada’s export dependence away from America by fueling a resource-hungry emerging Asia. Of course, this was still a year or two before “shale” and “fracking” would become household words, and before China’s raw materials imports really started to slow.

Now, with commodity prices having plunged and another Canadian election coming up on October 19, the Conservatives are in a bind. They are attempting to take the credit for Canada’s past successes while trying to shift the blame for its current flirtation with recession onto low oil prices, just as the NDP and Liberals are trying to pin the blame on the Conservatives for the current slowdown while shifting the credit for Canada’s past success onto the previously high oil prices. The NDP leader of the opposition, Thomas Mulcair, recently claimed that “Harper [the Prime Minister] put all of Canada’s eggs in one basket and then dropped the basket”, referring to the government’s support for the energy sector. (Canada is the world’s fourth largest producer of oil and gas, second largest producer of uranium, sixth largest generator of electricity, and fourteenth largest producer of coal). And yet Canada’s economic troubles might in a strange way actually work in the Conservatives’ favour, since they are still thought by many to be the party most adept at achieving GDP growth.

Then again, maybe Canada’s economic slowdown will end up haunting the Conservatives next week. Already this past May the Progressive Conservative party lost a provincial election in the right-wing stronghold of Alberta, where falling energy prices have been hitting the economy especially hard. Not only did Alberta’s Conservatives win six times fewer seats than the NDP did, but they also trailed behind the Wildrose Party, an Alberta-specific party that was formed in 2008, which also finished far ahead of the Conservatives in seats and even nearly beat the Conservatives in the popular vote.

So while nothing is certain yet even at this late stage in the national campaign, it does seem as though the best that Stephen Harper’s federal Conservative Party can hope for is to take the helm of a minority government like it did in 2004 and 2008. This seems to be an achievable goal for the Conservatives, since even if they win fewer seats than they did in 2011, which is likely, they could still benefit from the fact that the NDP and Liberals may divide the anti-Conservative vote along provincial, linguistic, and generational lines, if the NDP again depend heavily on getting votes from young people, British Columbia, and especially Quebec, and if the Liberals again do not.

In foreign affairs, Harper’s Conservatives are keeping to their strongly held anti-ISIS, anti-Putin, and pro-Israel model, while the NDP and Liberals are trying to stick them with the blame of not doing enough for Syrian refugees, polluting the global climate with carbon emissions, fear-mongering over the threat of Islamic terrorism and the spread of the Niqab within Canada, and, as it is often put, “betraying Canada’s traditional peace-keeping role”. (Canadians miss the days, which reached their apex under George W. Bush, when they were viewed as the good guys and Americans would sometimes pretend to be Canadians when travelling overseas). With Canadian soldiers now back from Afghanistan, where they suffered by far the most casualties of any Western armed forces apart from those of America or Britain, few Canadian voters are in favour of embarking on any new “on the ground” military interventions abroad. As a result, much of the debate has been whether or not the country should remain a token part of the international air force bombarding ISIS-held territories in eastern Syria.

The Liberals, who had won ten of the past thirteen federal elections until they were defeated in 2004 and 2008 and then crushed in 2011, have chosen Justin Trudeau, son of four-term former Prime Minister Pierre Elliot Trudeau and actress Margaret Sinclair, as their comeback kid. Trudeau was born less than ten months after his parents wed; his mother was only 22 years old at the time, while his father was 52 and three years into his nearly unbroken decade a half long tenure as PM. Trudeau the Son has had anything but a simple life. His parents were divorced when he was six years old, and his mother continued to be under media scrutiny as a result (among other things) of possibly having relationships with Ted Kennedy, Jack Nicholson, and Ron Wood. Most tragically, one of his two full siblings was killed in an avalanche when he was 27 years old.

In this election Trudeau has often been attacked for his inexperience (he only became an MP in 2008 and party leader in mid-2013), his youth (proving that Canada may be on the verge of entering a topsy-turvy Baby Boomer-led world in which being a 43 years old father of three can still be considered “too young”), his pretty-boy image, and of course his being a political princeling at a time when Canadian voters may be somewhat wary of family dynasties because of the despised W. Bush presidency and the Clinton-Bush faceoff that may be just around the corner south of the border. In 2011 the Liberals received fewer seats than the Conservatives or NDP in every province or territory outside of Newfoundland and Prince Edward Island (which together are home to fewer than 700,000 people) and tied with the Conservatives in Nova Scotia, yet still they remain hopeful that they will bounce back and re-take the Prime Minister’s office. Their trust in Trudeau may prove fruitful: recent polls have for the first time put the Liberals relatively far ahead in the lead with 35 percent support, compared to 29 percent for Harper’s Conservatives and 25 percent for Mulcair’s NDP.

While Trudeau is still seen as a political prince by much of the Canadian public, less well-known is that Thomas Mulcair, the NDP’s candidate for Prime Minister, also comes from a political lineage: his great-great and great-great-great grandfathers were both Premiers of Quebec. Mulcair is the second-born child of ten siblings in a half-Irish Catholic, half-French Canadian family, and grew up outside of Ottawa (on the Quebec side of the Ontario-Quebec border) and later in a suburb of Montreal. As recently as 2007 he was the NDP’s sole member of parliament from Quebec, which has since become the party’s political base. He was not, however, chiefly responsible for the NDP’s undprecedented success in the 2011 election, but rather came to his post as NDP leader following the death of 61-year-old Party Leader Jack Layton, who tragically died from cancer less than four months after his party’s massive electoral upswing that year.

The NDP was until relatively recently seen as a “far left” party many Canadians, but Mulcair has now been trying to position it closer to the political centre by promising, like the Conservatives but unlike the Liberals, to run a balanced federal budget next year and not raise income taxes for even the highest-earning Canadians. When asked in a recent debate about the need to run a deficit in order to provide government stimulus spending for the economy, Mulcair said that “Harper has hit the snooze button while Trudeau has hit the panic button”.

Mulcair has, however, kept more to traditional left-wing NDP positions on other issues like childcare support, corporate taxation, minimum wages, and environmental protection. He has in the past, from 2003 to 2006, served as Quebec’s provincial Minster of Sustainable Development, Environment, and Parks. Quebec is especially important for the NDP, as at the moment they hold 79 percent of its seats – and Quebec has 24 percent of Canada’s seats – compared to just nine percent for the Liberals, seven percent for the Conservatives, and five percent for the Bloc Quebecois.

For a country in which per capita carbon emissions are the highest among G7 economies and where love of the natural environment is held as both a defining national principle and mandatory beer commercial theme, Canada’s political leaders have been surprisingly ungiving on the subject of climate change. While all of the major parties have said they would invest in fossil fuel alternatives like wind and solar – a policy that has already led to a solar panel boom in a country that is not at all rich in wintertime sunshine – none are bullish on carbon taxes. Harper’s position is that they are little more than a left-wing trojan horse for general tax increases, so he is against them. Trudeau on the other hand is in favour of helping the provinces continue to take the lead on this issue (currently, British Columbia has a carbon tax and Ontario and Quebec cap-and-trade), while Mulcair supports a countrywide cap-and-trade system.

Even the Green Party has not been arguing for carbon taxes as much as one might assume they would. Instead they have been trying to position themselves as more than just a single-issue party, in order to remain more than just a single-seat party. (For the moment they actually possess three seats, because two members of parliament who were victorious as NDP representatives in the last election have since changed their colours to Green). Green Party candidates have been advocating for other popular policies, like a guaranteed minimum income and the repeal of Bill-C51. Party leader Elizabeth May recently told famous Canadian broadcaster Peter Mansbridge that they are likely to win 12 -15 seats and then ideally become a political kingmaker in parliament. This seems highly improbable: hatred of Stephen Harper has now built up to such a great extent among left-wing Canadians that Green supporters may be tempted to vote “strategically” for the NDP or Liberals just so that he will finally be kicked out of office.

Will Harper be kicked out of office? And if so, who will become Canada’s first new Prime Minister in a decade, Trudeau or Mulcair?

Tune in next week to find out.