Living next to a river, lake, or sea can have both benefits and drawbacks. Some of the benefits include access to shipping, the ability to relax on a beach or a boat, and the fact that large bodies of water tend to have a temperate effect on their local climates, keeping their cities cool in summer and warm in winter. Some of the drawbacks include being an impediment to road travel (you usually can’t drive a car on water), flooding, and Snowbelts.

While most US cities continue be located next to major rivers or bodies of water, these cities have tended to sprawl away from their bodies of water in recent decades, forming suburban areas further inland, such as Akron, Ohio or Warren, Michigan. In addition, many of the fastest-growing American cities have been in inland areas, like Phoenix, Atlanta, Las Vegas, or Austin. Water has taken a backseat.

In this article we will look briefly at ten places — 4 in Canada, 6 in the US — near Lake Ontario that have been shaped by water, and that might soon experience a revival because of water. 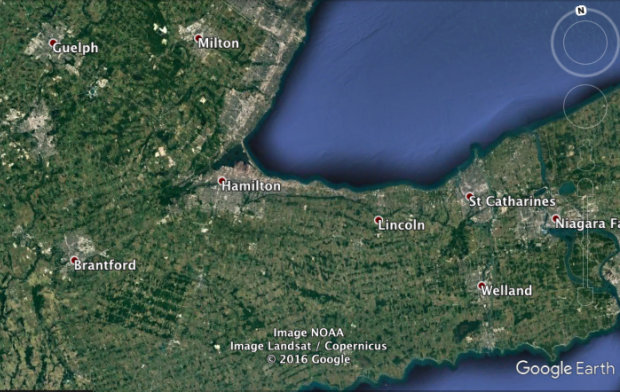 The city of Hamilton has the only significant natural harbour in the western half of Lake Ontario. Back in 1870, when water transportation was still more important than it is today, Hamilton’s population was half as large as Toronto’s. Hamilton’s land transportation, however, has been limited by its harbour, as well as by the Niagara Escarpment. Thus Hamilton has not been able to expand (or sprawl) in the way Toronto has. Hamilton’s population today is only 10-15 percent as large as Toronto’s. 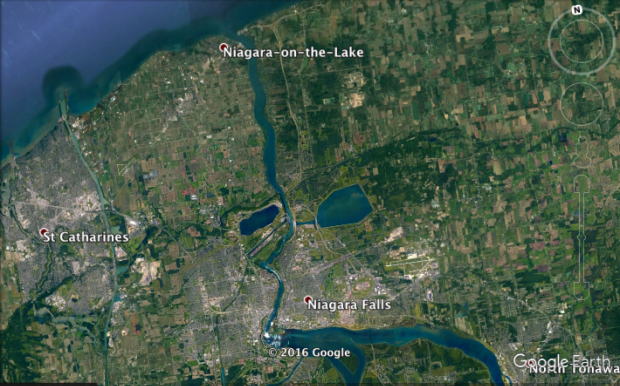 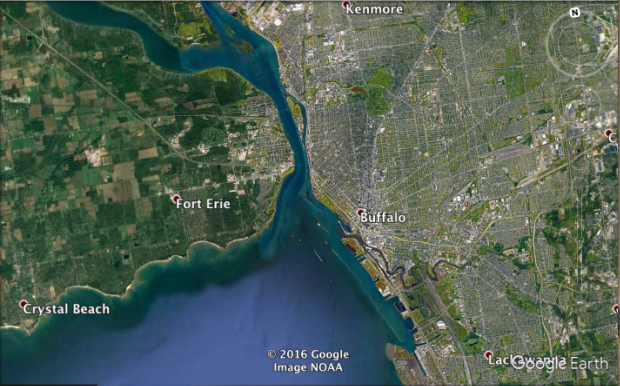 While the town of Niagara-on-the-Lake (population 18,000) and its neighbouring cities St Catharines (population 130,000) and Niagara Falls (pop. 80,000, plus 50,000 more who live on the US side of the city) are crow-flies cities vis-a-vis Toronto, via Lake Ontario, the small city of Fort Erie (population 31,000) is a crow-flies city vis-a-vis Buffalo, via the Niagara River. Although the Peace Bridge crosses the river, it tends to be crowded with border traffic, and it is an out-of-the-way route for the southern areas of Fort Erie. So, if it becomes easier to cross the 3 km-wide river border between Fort Erie and Buffalo’s harbour, Fort Erie may benefit. 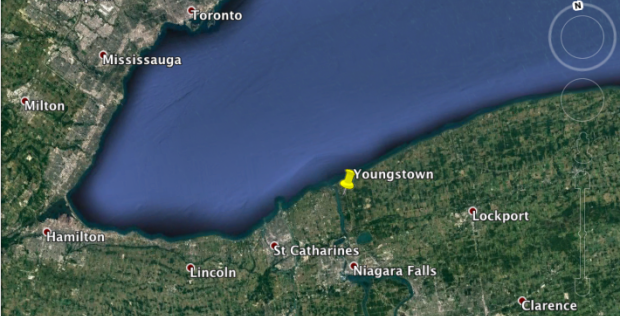 Niagara is a crow-flies city via lake, and Fort Erie via river, but the village of Youngstown (population 2000) in upstate New York is both.

The nearest US city east of Youngstown, meanwhile, is Lockport (population 21,000), 30 km away next to what was once America’s most important canal, the Erie Canal. 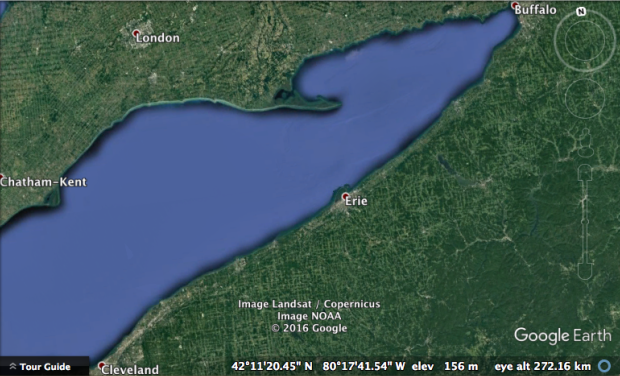 Buffalo too owes its significance to the Erie Canal. Indeed, prior the modern era of plentiful railways and highways, the canal allowed Buffalo to become America’s 10th largest city in the 1860s — and the fourth largest among cities without an ocean port. Buffalo remained the fourth largest city in the US without an ocean port until the 1900s. Today, however, the canal is used mainly by pleasure craft, and Buffalo’s location within the Great Lakes’ Snowbelt has made the city languish. Buffalo is now thought to be just the US’ 76th most populous city and 46th most populous “urban area”. It is the snowiest in the top 100. 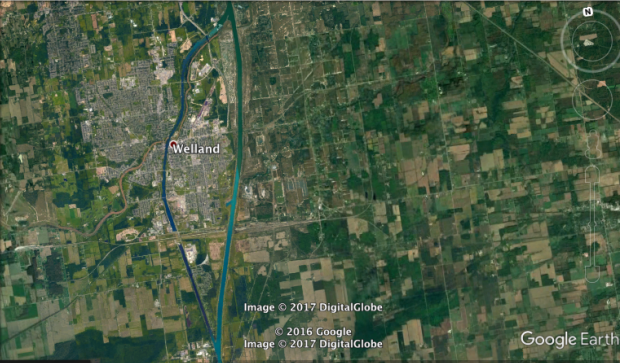 While the Erie Canal was America’s most important, the Welland Canal was and continues to be Canada’s. Whereas the Erie Canal is nearly 600 km long, the Welland Canal is only 43 km. But in order to bypass the Niagara Escarpment between Lake Ontario and Lake Erie, it covers almost as much elevation as Erie’s does. The city of Welland (population 52,000) sits on an oval-shaped island formed by two branches of the canal, one in use (approximately 3000 ships use it each year) and the other branch not.

Welland is the largest island city in Ontario, and the largest one in Canada (I think) apart from Montreal, St John’s, Victoria, or Nanaimo. The city is 70 km from Toronto by air, 110 km by land. Downstream from Welland is St Catharines, upstream is Port Colborne (population 18,000). 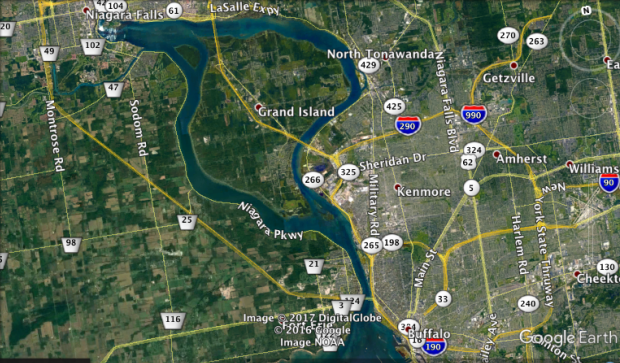 20 km east of Welland, back on the US side of the border, is another small island city, Grand Island (population 20,000). It is located on a circularly-shaped island roughly 10 km in diameter, which is linked, by two bridges, to Buffalo in the south and to Niagara Falls in the north. Yet no bridges link Grand Island to either Canada in the west or to Tonawanda (population 100,000) in the east. While Grand Island is only around the 140th largest island in the United States terms of area, it is in the top ten in terms of island populations.

The circular shape of the island might perhaps also prove significant — circles are, at least in theory, the most efficient shapes to build cities within. Grand Island also gets less snow per year on average (82 inches) than nearby Buffalo (95 inches), but more than nearby Niagara Falls (76 inches). Finally, Grand Island is next to the large hydroelectric dams at Niagara Falls. These have made New York the largest hydro producer in the country behind only Washington state and Oregon —without even counting the 45 percent of Niagara hydropower produced in Ontario. 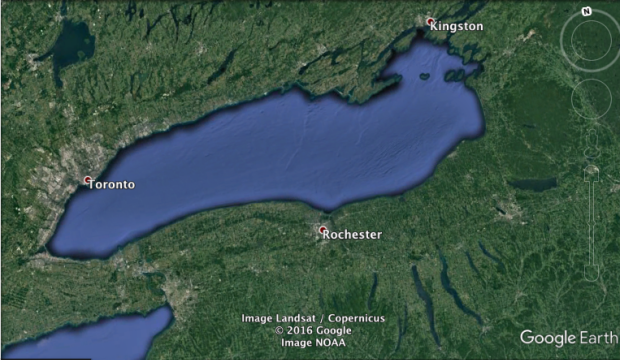 Much like Buffalo, Rochester (population 210,000) is an Erie Canal city in the Snowbelt. It gets 100 inches of snow per year on average, more than any city in the US with a population of 100,000 with the exception of Syracuse (124 inches of snow; population 140,000), 120 km to Rochester’s east. The only other US city which comes even close to Rochester in terms of both size and snow is Erie, Pennsylvania (101 inches of snow; population 99,000). The future of all these Snowbelt cities may be tied to questions such as: “will smarter cars and trucks allow driving on country roads during a snow squall to become less dangerous?”, or “will aging Baby Boomers take up cross-country skiing en masse?”

Rochester, unlike Syracuse or Buffalo, is a middle-of-the-lake city: Lake Ontario stretches approximately 150 km to Rochester’s east and 175 km to its east. It is a bit of a crow-flies city vis-a-vis Toronto (150 km vs 250 km). But across the lake from Rochester there are no major Canadian cities. There are only smaller cities, such as Cobourg, Belleville, Oshawa, and Peterborough. Rochester is not the biggest middle-of-the-lake city on the Great Lakes; it is second to Milwaukee (population 600,000). However Rochester is the biggest mid-lake city within the Snowbelt, ahead of others like Sudbury, Erie, and Grand Rapids. 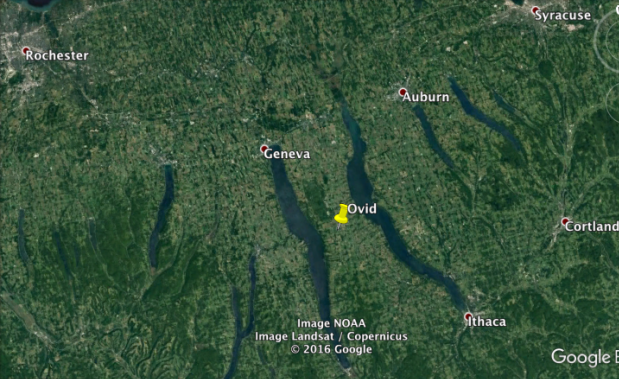 Many of the cities in upstate New York were given Classical names. Of the 20 most populous cities in the state, five fit this bill—Syracuse, Utica, Troy, Rome, and Ithaca. The tiny town Ovid (population 600), which along with Romulus (4,000) is one of the two seats of Seneca County, fit the pattern too. Though it is very small, and located 62 km from Lake Ontario, Ovid arguably deserves our attention here anyway. This is because of Ovid’s position between New York’s largest “Finger” Lakes: Cayuga Lake and Seneca Lake.

With the exception of Lake Michigan, Cayuga and Seneca are by far the two lengthiest, and most voluminous, lakes that lie entirely within the northeastern United States. Ovid sits at an elevation roughly 100-150 metres above the surface of the lakes, roughly five km from shores of the two lakes and 30 km from both the northern and southern tips of the lakes.

Ovid is different from all of the larger cities in the Finger Lakes region, such as Ithaca (where Cornell is located), Auburn (population 28,000), Geneva (13,000), Seneca Falls (located on the canal that links both lakes to the Erie Canal), or Canandaigua (11,000). Unlike Ovid, all of these cities are located by the tips of the lakes, rather than by their middles.

Thus Ovid faces a similar question to that faced by most of the other cities we have discussed thus far: can crossing its adjacent lakes become easier? Cayuga and Seneca lake are both only around 5 km wide in most areas, and in many places are far narrower than that. Were Cayuga, Seneca, and the other Finger Lakes to become easier to cross, a place like Ovid might become one of the more unique and interesting locations in the US.

Ovid is also a minor crow-flies city, vis-a-vis both Toronto (235 km vs 325 km) and Syracuse (65 km vs 90 km). And in addition to being a middle-of-the-lake town in relation to both Cayuga and Seneca, it is also, in a sense, a middle-of-the-lake town for Lake Ontario. It is only about 80 km away from Rochester, and 135 km south of areas in Ontario. 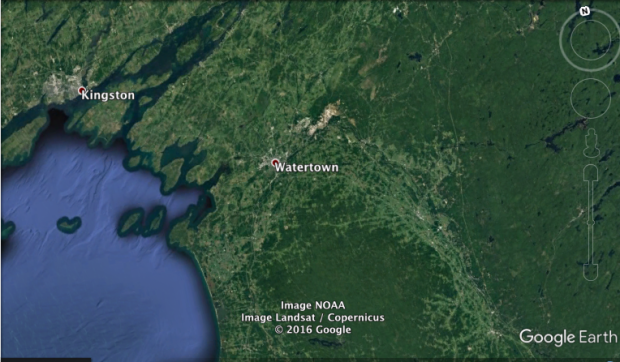 The final city on our list is the aptly named Watertown (population 28,000), which is a sort of mirror image of Hamilton (population 537,000), only a lot smaller, snowier, and not Canadian. Like Hamilton, it is located at the tip of Lake Ontario (though the eastern tip, not the western tip), has an excellent natural harbour, and is sandwiched between its harbour on one side and highlands on the other. But whereas Hamilton’s highland is  the top of the Niagara Escarpment, Watertown sits in the shadow of the much more formidable Adirondack Mountains.

Watertown’s nearest significant neighbours are the cities of Oswego (population 18,000) and the Canadian city Kingston (population 160,000). Watertown is a bit of a crow-flies town vis-a-vis Kingston: it is 50 km as the crow flies across Wolfe Island, but 90 km via  bridge.

More notably though, Watertown is an extreme Snowbelt city. The Watertown-Oswego-Adirondack region is the snowiest in the United States apart from Michigan’s Upper Peninsula, parts of the Rockies, and parts of Alaska. Watertown gets about a third more  snow than Buffalo or Rochester do, and nearly double the amount of snow that Toronto does. Areas in the western foothills of the nearby Adirondacks get even more: the town of Boonville (population 2,000), for example, 70 km southeast of Watertown, gets more than 200 inches of snow per year on average, making it perhaps the snowiest place in the US among towns or cities with at least 1,000 residents, excepting only Valdez, Alaska (population 4,000), Crested Butte, Colorado (pop. 1,500) or Hancock, Michigan (4,500).

Watertown is also just 200 km away, across the Adirondacks, from Lake Champlain, which is by far the largest lake in the United States east of the Great Lakes and north of Florida.