In democratic countries, political analysts often try to sniff out any regional divisions that exist within a given country by looking at the voting patterns of that country’s electorate. In Italy’s recent election, for instance, it has been thought to be significant that Italians living in northern Italy tended to vote centre/right (including for the Northern League), whereas in southern Italy people tended to vote for the Five Star Movement.

In countries like the People’s Republic of China, however, where no such elections are held, different factors may be looked at instead, in order to gauge the level of regionalism that might exist.

One interesting thing to note here is that almost none of modern China’s top politicians were born in peripherally located areas in the country’s southeast, southwest, northwest, or northeast. The only province in southeast or southwest China to have produced a somewhat notable number of Politburo members is Fujian, a relatively small province where Xi Jinping served 17 years of his career, which is important to China in part because it shares unique social and linguistic connections with the nearby island of Taiwan.

The chart above shows, by birth-province, the number of members in the politburo, politburo standing committee, party secretariat, central military commission, provincial party secretary, or previous politburo standing committee members going back to 1990, adjusted to take into account the varying population sizes of each province. Apart from Fujian and Qinghai (which ranks high on this list only because it has such a tiny population, by China’s standards), all of the provinces at the top of this list are in the north or central coastal regions.

China’s most populous province, Guangdong, has had no leaders on this list. As of 2017, Guangdong may have also broken a thirty year tradition by having its provincial governor not be a native of the province. It is now one of the few provinces not to have a native-born governor.

In this picture above, we see the birthplaces of China’s current top leadership, the members of the Standing Committee. Here we also see the one big exception, Qinghai-born Zhao Leji. Zhao’s career is noteworthy. Zhao served as party chief of Qinghai, breaking the unwritten rule that a person should never be party chief in their birth-province. Zhao was later party chief in Shaanxi, where his parents were from; this too broke an unwritten rule, that a person should not be party chief in their “native” province. Now, Zhao has not only reached the Standing Committee, but has taken over Wang Qishan’s anti-corruption job, a critical position. Some have argued that Zhao has been able to rise in this way mainly because Xi Jinping’s family is also from Shaanxi. Here’s a map of the birth-provinces of the current 25-member Politburo Central Committee (which includes within it the 7 members of the higher-ranked Standing Committee): 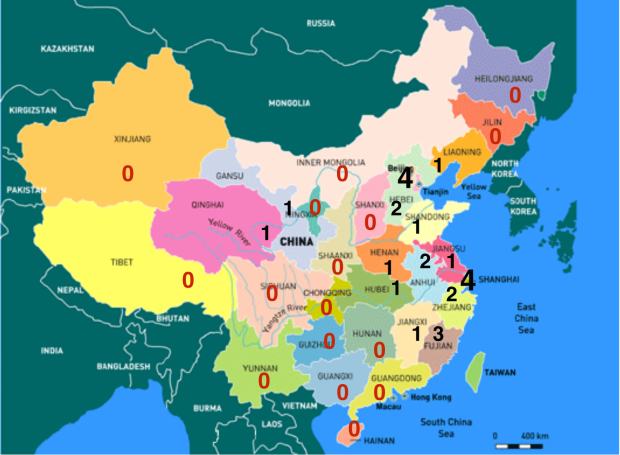 And here, finally, is a map of the birth-provinces of the current provincial party chiefs: 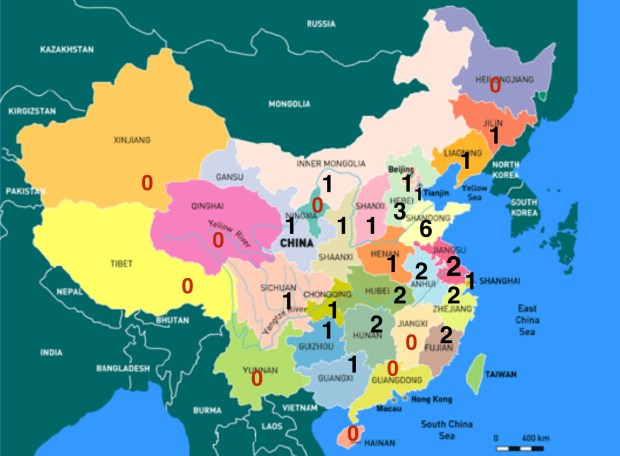