In recent years there have been two excellent new technologies, car apps and transit apps, which have nevertheless been unable to successfully solve traffic problems. Transit apps, which tell you when buses or trains are coming and, in some cases, tell you how crowded each bus is*, are useful but are still no antidote to challenges such as getting to and from bus stops or waiting for buses in bad weather. Car apps, which can summon lifts or carpools or make it easy to rent a car, tend to do little or nothing to alleviate traffic jams, and can also be relatively costly or inconvenient, especially in bad weather when there are no vehicles nearby, or when demand for lifts outstrips supply.

*This is very useful because buses tend to bunch fairly close together, and the front bus in each grouping tends to be much more crowded than the buses behind them. With this information, people can simply wait a tiny bit longer to get on a less crowded bus, without taking the risk that the bus further behind will be just as crowded or will not arrive any time soon.

What might be needed, therefore, is a way to use these new technologies to get to and from transit, especially in bad weather, and make it easier to wait for buses in bad weather, and do so without adding to traffic jams that block more efficient modes of transportation such as buses or streetcars or (in good weather) bikes.

Here, then, is a possible solution: have car-sharing cars double as sheltered bus stops in bad weather. 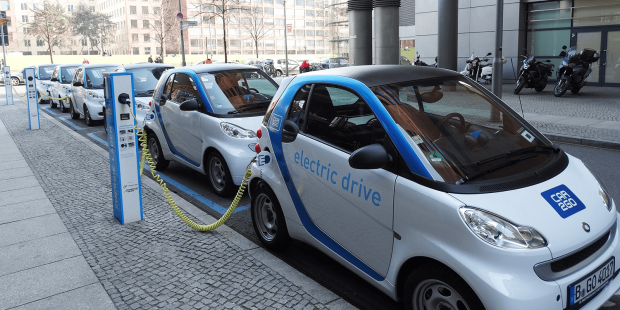 Such a system could have a number of advantages:

It is not just car-sharing technologies that could make this idea viable, but also transit apps.

By having the cars equipped with these apps, people will able to use them as sheltered bus stops without needing to have a clear view of the horizon to see if a bus is approaching. Even though these cars would ideally be located immediately next to bus stops, the ability to know in advance when a bus is coming means that if necessary they could be located a bit further away from the bus stops, on an adjacent side street, without the risk of people missing their bus.

That might not even be needed though, since the car-sharing bus stops might not need to take up much more space than the current public bicycle-sharing systems often do, particularly if one-seaters or pedal-cars are used. (In Toronto, there are already 360 public bicycle-sharing stations, even though few people use them in the winter or during heat waves). People would then be able to use their transit passes to unlock the car’s door by prepaying their bus fare, so that the cars would not be misused too much.