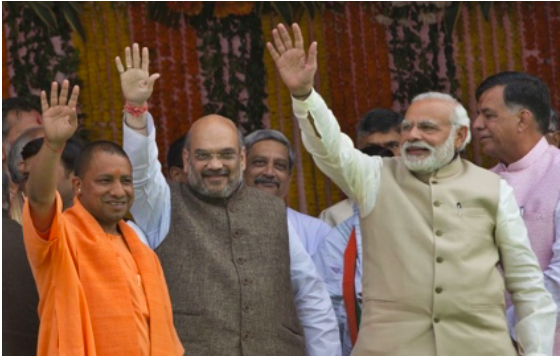 With a slowing economy, a rival Congress Party forming alliances with regional parties in states like Tamil Nadu, and a separate alliance being formed between two former Chief Ministers of India’s most populous state, Uttar Pradesh, many had expected Narendra Modi to risk losing his majority government, and perhaps even his position as prime minister, following the elections held in India this month. Instead, Modi’s Bharatiya Janata Party (BJP) increased the size of its majority, winning 56 percent of seats—or 65 percent, when combined with smaller BJP-allied parties—in the lower house of India’s parliament. BJP’s rival the Congress Party, which had held the office of prime minister in 55 out of India’s 67 years prior to Modi’s being elected, won just 10 percent of seats. Congress’ alliance won 17 percent of seats, mainly thanks to voters in Tamil Nadu. 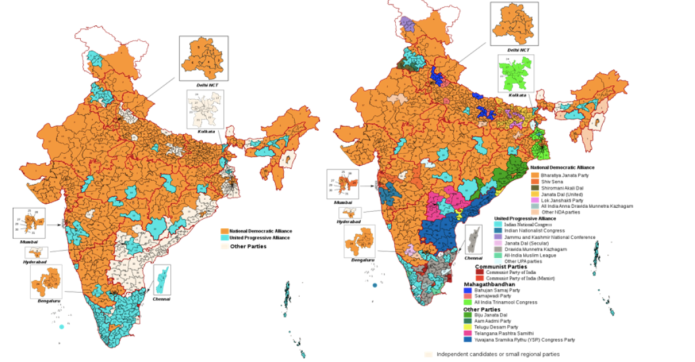 Figure 1– Note: the All India Trinamool Congress, the leading political party in India’s most populous coastal state, West Bengal, is incorrectly included in the Mahagathbandhan (“Grand Alliance”) in the right-hand map above. That alliance, which was formed recently between the Bahajun Samaj Party (BSP) and the Samajwadi Party (SP), is led by two former political rivals of one another — Akhilesh Yadav and Mayawati – who had consecutively been Chief Minister of Uttar Pradesh from 2002 until 2017

As in the previous election in 2014, the BJP and its alliance dominated the north and west parts of India, leaving Congress’ alliance, along with several parties unaffiliated with either Congress or the BJP, to split the smaller south and east[*]. The unaffiliated BSP-SP alliance in India’s north, meanwhile, which was formed in response to the BJP sweeping Uttar Pradesh in 2014 and winning state-level elections in Uttar Pradesh in 2017 (for the first time since 1996), won just three percent of seats[**].

[*]More so than in 2014, however, the BJP now made inroads into the south and east, notably in West Bengal, Odisha, Telangana, and Karnataka
[**]Despite receiving a sizeable chunk of India’s popular vote, because of how populous Uttar Pradesh is. This occurred to an even greater extent in the previous election: in 2014 the BSP received more than 20 million votes, the third most of any party in India, yet did not get even a single seat in parliament

Modi’s BJP was thus able to be re-elected with a majority government for the first time in its history. The only politicians who had ever previously been re-elected with a majority were India’s founding prime minister, Jawaharlal Nehru, and Nehru’s daughter Indira Gandhi. By defeating Indira’s grandson Rahul in the past two elections, Modi has now joined this illustrious list.

Modi has many skills that have contributed to this political success. He is notoriously hard-working and uncorrupt, for example. Yet Modi has also been in possession of an even more important attribute thus far during his political career, the most important a politician can have: luck.

A Quick Analysis of Modi’s Career

Modi’s political career, first as Chief Minister of Gujarat from 2001 to 2014 and then as Prime Minister of India since 2014, has been based on two pillars:

These two aspects of Modi’s appeal have contributed to his political success in northern India in particular, where Hindi(-Urdu) is spoken relatively widely and where, especially in inland states like Uttar Pradesh and Bihar, poorer populations live who may be more susceptible to BJP-style nationalism or promises of economic growth (or at least, of reduced corruption). Modi himself represents the constituency of Varanasi, in Uttar Pradesh. 20 percent of BJP seats are from that state.

With more than 200 million people, Uttar Pradesh is by far the most populous state not just in India, but anywhere in the world. Its neighbours too are populous: Uttar Pradesh directly borders India’s third and fifth most populous states, Bihar and Madhya Pradesh. It also directly borders India’s capital city-state, Delhi. Modi, in addition to being MP for the holy city Varanasi in Uttar Pradesh, has had his political career intertwine with this state in other significant ways. Notably, by way of the 2002 Gujarat Riots’ direct connection to the Ayodhya Mosque/Temple Dispute (a long, complex story that is analogous to, though in many ways different from and even more tragic than, the Middle East’s dispute over Jerusalem’s holy sites), and the continuing involvement in that dispute by BJP leaders such as Modi’s designated Chief Minister of Uttar Pradesh, Yogi Adityanath. The BJP’s rival, the Congress Party, also has roots in Uttar Pradesh. Its city of Allahabad (now renamed Prayagraj by Yogi Adityanath’s government) was the home of the Nehru-Gandhi dynasty (unrelated to the Gandhi), a family that has supplied four generations of Congress’ leaders. The current scion of the family, Rahul Gandhi, is however an MP for a constituency in Kerala, in India’s far south. Rahul also contested, but lost, his family’s historic seat in Amethi, Uttar Pradesh (located just outside Lucknow, the state’s capital).

This has led to an obvious, arguably misleading debate in Western media, over whether Modi’s economic pros justify his political cons. This might or might not be a legitimate debate, but it also overlooks one of the key realities of Modi’s career: the fact that much, maybe most, of his economic success has been due to factors beyond his control. Modi has been extremely lucky in relation to factors such as global economic growth, oil and gas prices, and the utterly different economic characteristics of Gujarat (the state where Modi rose to fame) compared to India as a whole.

Modi was Chief Minister of the state Gujarat from October 2001 until May 2014, when he became India’s prime minister. Two facts must be recognized to put Modi’s time in Gujarat into context: the exceptional status of Gujarat, and the exceptional nature of the period from 2001-2014.

The period from 2001 to 2014 was the 2000s commodity boom, the period that followed the early 2000s recession when, apart from a sharp dip during the 2008-2009 recession, energy and other commodity prices were high and global economic growth was significant, particularly in China and other developing markets but also in North America and (before the 2010s) Europe.  Brent crude oil, for example, rose from all-time lows of $9 in 1998 to $144 in 2008 and $128 in 2012. Modi came into office in Gujarat when oil prices were $20, exited office with oil at $110, then watched from his new office in New Delhi as oil prices fell to $46 in the subsequent seven months. 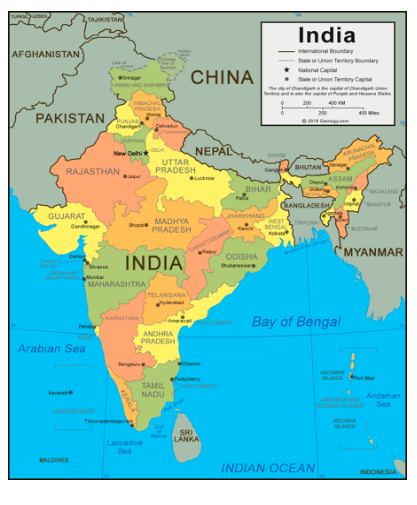 The characteristics of Gujarat’s economy are similarly exceptional. Together with its next-door neighbor the city of Mumbai, the state of Gujarat is India’s leading commercial hub. This is largely a result of Gujarat’s uniquely long and naturally sheltered coastline, which has allowed it  to account for an estimated 69 percent of all cargo volume handled at India’s private ports, as well as being home to India’s busiest public port, a remarkable feat considering that Gujarat’s 60 million people are only 5 percent of India’s population.

Just as remarkable is the Gujarati diaspora, which leads in commercial activity throughout much of the Indian Ocean, particularly in eastern Africa. (The most famous Gujarati abroad was, of course, Mohandas Gandhi, who lived in South Africa for more than two decades). The diaspora thrives as far away as the US, where 20 percent or so of US-Indians are Gujaratis, and are one of America’s most successful groups.

The Gujarati diaspora has historically also been prominent in the nearby Gulf region of the Middle East. It remains active in the Gulf today, particularly in Oman and the coast of Pakistan. Gujarat itself, moreover, holds the most prominent position in India’s oil and gas industries, in terms of oil production, oil refining, oil pipelines, gas pipelines, LNG regasification, and petrochemicals.

As such, the commodity boom and global economic growth helped Gujarat remain the fastest-growing Indian economy in the 2000s, apart from the small Himalayan states Uttarakhand and Sikkim.

India’s economy is the opposite of Gujarat’s. It is relatively insular rather than dependent on global economic activity, the major exception to this being the large amount of oil it imports, more than any country apart from the US or China. Global economic conditions since Modi became prime minister are unlike those which existed prior to 2015, however. Oil prices have fallen to a range of $30-$70, benefiting India. Global and developing markets have slowed, which has hurt India but not nearly as much as it has hurt most other economies, in particular commodity exporters like Brazil or Russia. Indeed, India has become the fastest-growing “BRIC” economy.

There is even a possibility that India’s slowing economy has helped Modi. It may be that the slowing was not severe enough to undercut Modi’s reputation as a great economic steward, yet  was significant enough for people to want a great economic steward – Modi – to remain in charge in order to deal with it. In other words, the lucky timing that helped Modi to build up his economic reputation in Gujarat, combined with the luck which has prevented India’s recent economic slowdown from being severe like many other countries’, may have helped lead to Modi’s huge victory.

This is not a unique situation. Politicians, no matter how praiseworthy or skilled, often do not control their own fortunes. Modi remains in luck now. More troublingly, perhaps, so does Yogi Adityanath.

2 thoughts on “Modi’s in Luck Now: The importance of good luck, and Uttar Pradesh, in the political success of Narendra Modi”